How Mbingo Baptist Hospital Came to Be...

Mbingo Baptist Hospital is a 45 minute drive up the hill from Bamenda, Cameroon, which is a 7 hour drive from the port city of Duoala.  The hospital is nestled along a beautiful, lush green mountain range speckled with waterfalls.  It is a place of such beauty that it begs the question of how could the hospital have ever afforded to purchase the land here.

In the 1950's, in a quest to build a hospital for patients suffering from Hansen's Disease (leprosy), the founders asked one province to build a hospital for their patients, however, out of fear of this dreaded disfiguring disease, they were turned down by the first province and then the second province. The hospital founders then came to Bamenda.  The owner of the land at Mbingo brought the hospital founders up to the top of the mountain behind the proposed location of the hospital.  He believed that the mountain would provide a natural geographical boundary that would prevent the spread of leprosy. 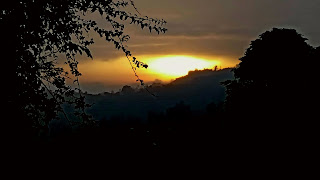 While standing on the top of the mountain, the land owner stretched out his arms as far as they would go and said, "You can have this area" including everything up to the beautiful, majestic green mountain ridges and down into the valley below.

The hospital founders then went out and staked out the property lines and in 1953 opened Mbingo Baptist Hospital as a leprosarium.  Although the hospital still has a leprosy (Hansen's Disease) ward, it also has large surgery, medicine and maternity influence, along with orthopedics, ophthalmology, ENT with speech therapy, and physical therapy and rehabilitation.

It is here that my family is serving for the month of July.  Today, July 4th, was my first full day in the operating room here (except for a little seven year old girl with perineal trauma that I operated on over the weekend).  Later this week I will show you inside the hospital and reveal the inner workings of this place and the ministry that is provided here.