A Cup of Water...or a Night of Air Conditioning...

Last month (April 2018) I visited the home of two American nurses in Togo, West Africa.  April is one of the four hot months in northern Togo, located on the southern edge of the Sahara Desert.  Temperatures were over 100 degrees every day, with 40% humidity, making it feel like 120 degrees every day.

At their home, they only had ceiling fans to cool them down and no air conditioner. There is a nurses sleep room nearby with air conditioning, however, it was not being used because it cost $1 an hour to run the air conditioner, and it was complicated to figure out who owed what, so the sleep room wasn't getting used.

I posted a plea on my Facebook page asking for donations to help pay the cost of air conditioning, and in two weeks, over $8,000 came in so that these nurses could sleep in air conditioning.  Effective immediately, the AC will run 16 hours a day (8 hours during the day for the night shift nurses; and 8 hours at night for the day shift nurses) during the four hot months of the year.  Also, the hospital administrator thinks they may be able to reduce the electricity cost to 50 cents per hour, which means that the $8,000 that was donated is enough to pay for 8 years of air conditioning.  Below are some of the nurses who will benefit from the generosity of so many people. 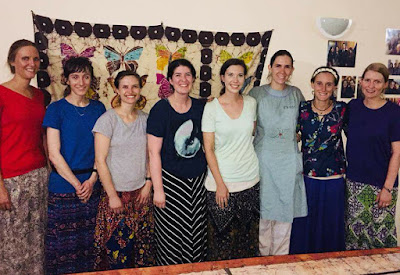 As I thought about this gift to these nurses, I thought about how in two of the Gospels is an account of Jesus talking about people giving even a cup of water to someone who is a follower of Jesus, and that the giver of the cup of water will receive their reward.  In much the same way as a cup of water, a night of air conditioning is even better!  Thank you.

I will be returning to Cameroon in June, to teach and serve at Mbingo Baptist Hospital.  My wife and daughters, along with two others, will be joining me for the last three weeks that I am there.

For those interested in financially supporting this work, you can go to the website below and then scroll down to the box that says, "FIND DOCTOR/MEDICAL PROFESSIONAL" and type "SAWYER, ALLAN" in the box.  If you see a picture of me holding a little girl, then you are on the right page.  Thank you!  Here is the link.

My favorite benediction reads as follows: