Doing Something Bigger Than Yourself... 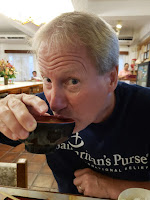 In late November 2018, I was returning home to Arizona from Saipan.  One month earlier I had never heard of Saipan.  On October 24, 2018, super typhoon Yutu hit this small Pacific Island with a category 5 typhoon, with winds from 180 to 230 miles per hour that continued for five hours. Samaritan's Purse deployed their DC-8 along with their Disaster Assistance Response Team (DART) to go to serve on Saipan and the sister island, Tinian.

After being home for a month, and allowing the thoughts simmer in the back of my mind, it seems that my fingers are ready to write; to type out what has been percolating in my mind.

In early November, my flight landed in Honolulu, where I was to join the rest of the team who were arriving on the Samaritan's Purse DC-8 cargo plane, which, by the way, will turn 50 years old on December 24, 2018.  Of the 20+ people I was joining, I only knew one of them.

When we landed in Saipan, the jet bridge that should connect the terminal to the airplane had been destroyed by the storm.

We met our team leader, Mark Langham, who had only been on the island for 36 hours before we had landed.  He looked like a mix between a contemporary Jesus and a hippie leftover from the sixties who got lost on his way to Haight-Ashbury, San Francisco and time warped into 2018.  But what I came to love about Mark was that his external appearances were completely deceiving. The adjectives that describe Mark are: articulate, kind, compassionate, devoted, committed, passionate, uncompromising integrity, insightful, and genuine.

And those are just the ones that are on the tip of my tongue. But then there were another 23+ people who I could say the same thing about. Most mornings, a different team member would speak during our morning devotions; speaking from their life experiences and from their hearts. 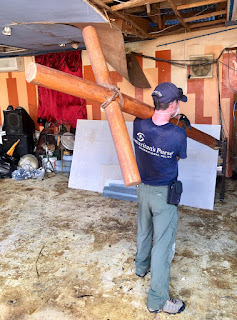 As these team members, over the course of about 7 weeks, served the needs of nearly 8,000 homes on the islands of Saipan and Tinian, they were the image of Isaiah 52:7 and Romans 10:15. We watched in amazement as God opened the doors for us to serve. There was one particular marginalized people group in Saipan that lived in three different communities.

One morning we had no idea how we were going to serve the medical needs of this community, and by the end of that day we were doing a medical clinic in front of one of their places of worship and with the blessing of their community leaders.  This scenario repeated itself three more time over the next 5 days.

In a few days I leave for North Carolina to receive training specific to Ebola and then soon after returning to Arizona, I will deploy to serve in an area at high risk for Ebola. I'm grateful for each of you who reads this blog and prays for the work that we are doing. In return, I am praying Romans 15:13 for each of you.  "May the God of all hope fill you with all joy and peace as you trust in Him, so that you may overflow with hope by the power of the Holy Spirit."