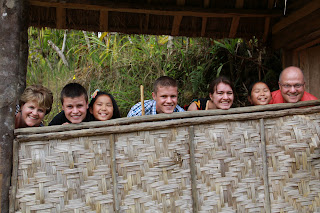 On Sunday afternoon the hospital was quiet and we had the chance to escape to visit an orchid garden at Rondon Ridge up on the side of a mountain outside of Mount Hagen.  Our friends, the Dooley family, took us all on the outing.  We finally feel as if we are getting adjusted to the right time zone.  I had been up the night before delivering a baby for one of the midwives and then at midnight did an emergency cesarean section for a patient who came into the hospital in labor with a breech baby.  In spite of being up half the night, I still felt up to going up to Rondon Ridge.

One of the hardest things and yet one of the most interesting things here is the advanced state of disease compared to what we see in Arizona.  Today I saw about forty patients between the hospital and the clinic, and in just those forty patients I saw a patient with advanced stage cervical cancer, a 17 year old girl with a ten pound ovarian tumor, and, sadly, two women whose babies were not alive when I did their ultrasounds.  One of these had been in a car accident a few days ago and the surgeon had to repair a lacerated liver.  She is twenty weeks pregnant, and when I looked with the ultrasound this morning, there was no fetal heart beat.  Then later in the day a woman came in at seven months into her pregnancy and had not felt the baby move for two weeks.  The ultrasound revealed that there was extensive hydropic change (fluid overload) and there was no heart beat.  As I prayed for the second woman after explaining what had happened, her demeanor changed from being cold to having tears stream down her face.  All of these things happened in such a short amount of time.  It is all a bit overwhelming.

Thank you all for reading the blog.   Glaciers move faster than the internet speeds in Papua New Guinea, and I am very happy that I was finally able to post a blog for you to see.