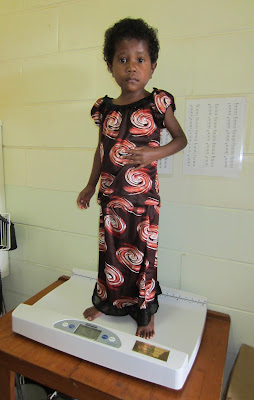 Several months ago we asked the doctors at Kudjip Hospital if there was anything that they needed.  One of the things that they needed was an accurate battery powered pediatric scale that  weighed in kilograms.  We used some of the money that had been donated by our church, Palmcroft Baptist Church, to purchase this scale.  We were so happy to see that it made it in perfect condition in our luggage.  This was the little girl that had been screened by Dr. Kirk Milhoan (see earlier blog) and she was very willing to demonstrate how to stand still on the scale while being weighed.

This scale will be used by the clinic, the emergency room, the newborn nursery, and labor and delivery, and each of these facilities are only a few steps away from the room where the scale is located.  The prior scale was one of the old fashioned counter-weight scale that only weighed in pounds.  The charts on the wall behind the little girl are the conversion charts from pounds to kilograms, but this was a source of potential error.  The doctors, clinic staff and nurses were so excited about this new scale and everyone said to say "thank you" to our church for donating the scale.