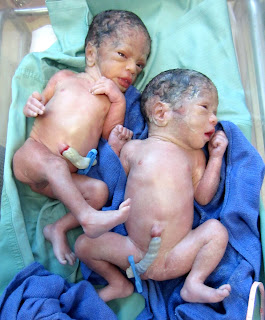 This morning we had just started to make rounds on the maternity ward when the midwife came up to us and said that a woman had just come from the bush into the labor ward completely dilated and that the baby was breech.  Dr. Mel (Imelda), the national physician-in-training that I had been working with, and I went through the doors at the end of the maternity ward into the labor area.

As we parted the curtain we saw the baby in a complete breech presentation delivering as we rapidly put on our gloves.  The delivery went well, and I was busy with the resuscitation when the midwife said, "there is another membrane here."  I turned to see a bulging bag of water.  Quickly doing an exam and feeling the mother's abdomen, I discovered a second twin, this time in a head down presentation, and in a few minutes delivered the second twin.  Both were girls and both were doing well.  I did another exam just to be certain I wasn't missing a triplet!  I had to chuckle, because after delivering babies for over two decades, I can say that I have never delivered twins vaginally where twin A was breech and twin B was vertex.  That was a first for me! 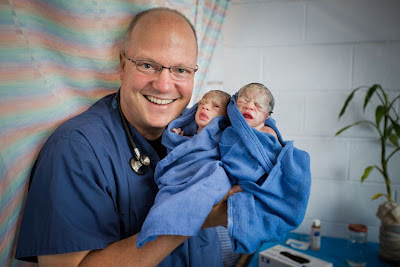 So the morning started off on a happy note, but the afternoon didn't start nearly so well.  I did a cesarean section for a woman who was 34 weeks pregnant with premature rupture of her membranes and meconium staining of the amniotic fluid and no fluid could be seen inside the uterus with the ultrasound.  The fetal heart rate had been fine.  When I delivered the baby, however, the baby was limp and was caked in the meconium.  In spite of vigorous CPR for 25 minutes we were never able to get the baby to take a breath or to get a heart beat after the cord had been clamped.  The two other doctors that had rushed to the delivery room, Dr. Jim and Dr. Susan, to help me eventually both shook their heads and we stopped CPR.

I wrapped the little baby girl in a small blue sheet and carried her over to her grieving mother on the operating table.  It is hard to explain the pain and the hollow feeling inside when this is the outcome.  As a physician, I wonder at times if it is like an Olympic athlete who has prepared a lifetime for a race, only to trip and fall and be disqualified in the final heat.  The feeling is crushing.  Everyone had left the operating room and I went back inside to write my notes and orders in the chart.  The small CD player in the room started to play the song "You Raise Me Up" by the group Selah.  Tears streamed down my face and dripped onto the papers that I was writing on.  I felt like I could hardly breathe.
Posted by Allan T. Sawyer, MD at 4:56 AM