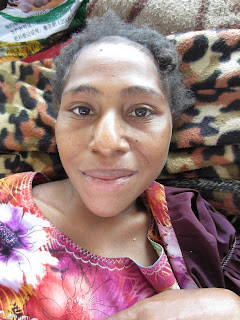 Often the patients here help to give me a sense of perspective. This patient is Margaret. She is about 28 weeks pregnant, but she has stage four cervical cancer and is bleeding nearly every day, which is causing her to be severely anemic. We are giving her blood transfusions and pain medication, however, most of what we are doing is to save the life of her baby, because her cervical cancer is terminal.  There is essentially no effective treatments available to her in Papua New Guinea, so her treatments is entirely palliative in nature.

Below is a picture of me and my friend Peter Dom.  I have written before about Peter when I was in Papua New Guinea two years ago.  Twenty years ago, in March 1992, he was in church and the church building fell down, crushing Peter's back under the main support beam.  He was paralyzed.  Ever since then he has lived in a curtained off area of the surgical ward.  Peter is always so happy to see me.  I gave him some new medium sized yellow shirts (his favorite color) and some new knit caps that some of the Operation Christmas Child volunteers had made for me to give out. 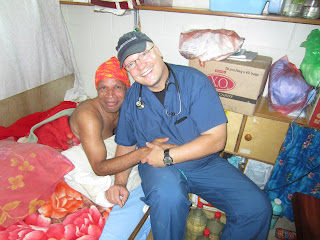 Peter loves to receive mail.  If any of you would like to send Peter a picture of your family and a note telling him that you are praying for him, he will hang it on the wall in his cubicle. You can address it to: Peter Dom, PO Box 456, Mount Hagen, WHP, Papua New Guinea.  If you would like to send him a small priority mail box, you can includes ball point pens, or AA batteries, both of which he loves.  He uses the AA batteries to play his CD player that we gave him.  He also likes CDs of Christian music.  I go by the surgery ward to see Peter every day, and often introduce new volunteers to him.
We are very excited about the arrival of the Samaritan's Purse media team that is coming soon to PNG.  Part of this team will be traveling with us to the Enga Province to work with the Hewa tribe next Thursday.
Posted by Allan T. Sawyer, MD at 10:15 AM