The surgeon is in...

Tuesdays are surgery days and Dr. Jim and I were repairing eight of ten of the flexor tendons of the hand of a woman whose husbands second wife had nearly completely cut off the first wife's right hand.  If anyone thinks that polygamy is a good idea, they need to come to Kudjip Hospital to see the consequences of polygamy. 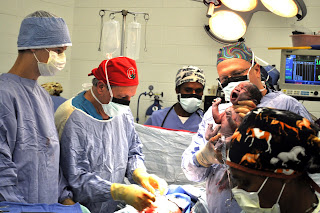 Half way through the two hour hand surgery, Dr. Stephanie came into the operating room to tell us that a woman just came into the labor ward in active labor with twins and that twin A was breech and twin B was transverse and that we needed to do a cesarean section.  We finished the hand surgery and 90 minutes later started the cesarean.

The operating theatre (as it is called here due to the British influence in PNG), was busy.  In this first picture you can see me holding up one of the twins, with the scrub nurse in the foreground, David the nurse anesthetist just to my right, Dr. Jim wearing his favorite red Ohio State scrub hat, and then the tallest of the group is our son Andrew, who had scrubbed into surgery for the very first time. 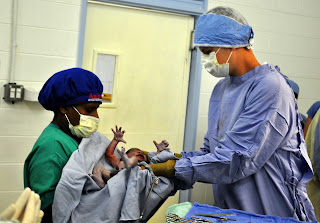 The nursery nurse was behind Andrew, so each time that I delivered the twins, I handed the babies to Andrew, and he turned around and handed the twins to the nursery nurse.  It sounded like a presidential press conference with all of the cameras clicking in the operating room (we had a lot of observers).  Andrew was very excited and it was the high point of his day...and mine, too!
Posted by Allan T. Sawyer, MD at 5:45 AM