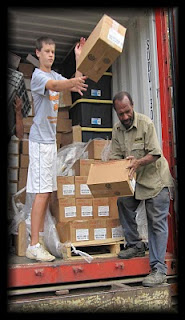 Monday, June 21, 2010:  Four times a year, Dr. Todd Winter with the Nazarene Hospital Foundation, sends a railroad sized container full of supplies for the hospital.  This one arrived today after being held in the port city for a month due to paperwork issues.  We were so excited to receive the container, because it contained items that we had included for the hospital and for the volunteer house, called the Barnabas House, which is the house where we are staying.  The photo is of our son, Andrew, helping out.  He was one of the first to come to help out.  Here he is demonstrating how to throw a box of supplies to the staff standing down below who were loading the supplies onto the back of a truck to go to the pharmacy.  (I hope that box wasn't labelled "fragile"!)  I had just finished two surgeries when the container arrived, and spent an hour helping out everyone to unload the container.
Back at the hospital I noticed three men with their heads turned toward the entrance to the emergency room.  They were looking intently, and not speaking.  Then I heard some commotion, so I went around into the emergency room.  A five year old little naked lifeless boy had just been brought into the ER in the arms of his distraught father.  All of the staff in the tiny emergency room went to work to save this little boy's life.  His body was still warm, but he did not have a heart beat.  We quickly secured an airway and I started chest compressions.  After a few minutes, Dr. Jim came around the corner and began to help.  We never did get a pulse, and the family told us that he had stopped breathing about 15 minutes before they had arrived at the hospital.  The child's pupils were fixed and dilated.  It was just too late.  Dr. Jim went over to the family and explained that their son was gone and immediately started praying for the family.  The person who appeared to be the boys' grandmother was prostrate on the floor wailing.  The entire family started weeping, crying and wailing.  It was such a sad moment.  Then just a few minutes later I was off to drain a hematoma.  Life is so fragile here.  There is so much work to be done.
Posted by Allan T. Sawyer, MD at 9:37 PM