My apologies again for being late in blogging. We have not had internet access for the past five days. 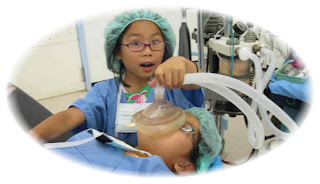 Tuesday, June 29, 2010: The operating theatre staff had a special lunch for our family on our last day at Kudjip Nazarene Hospital. They prepared chicken, pineapple, rice, lettuce and bread and we brought the Crystal Light. They posted a big sign on the door to the Central Sterile room that thanked us for coming. Since the party was back inside the operating theatre, everyone had to put on surgical garb, including our daughters Anna and Amber. Although this photo is slightly out of focus, here is Amber administering anesthesia to her twin sister, Anna. 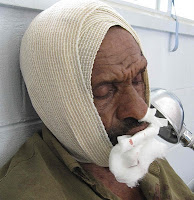 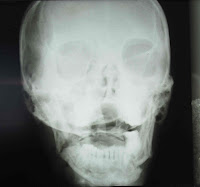 In just under 30 days I performed or assisted on 49 major surgeries, not including minor procedures or deliveries. One of the last surgeries was to wire the jaw of this man who had been beaten up quite badly. His jaw was broken in two places. His jaw will be wired closed for six weeks, during which time he will have to be on a liquid diet. Hmmm…a liquid diet in a third world country. There just are not very many options for a liquid diet here, and most people could not afford the few options that exist. I think it is best to avoid fighting in the first place!
On our final evening at Kudjip, the entire compound gathered in the living room of the Barnabas House (the volunteer house) for a time of singing, prayer and eating popcorn. The last people didn’t leave until 11 PM as it was so hard to say good-bye to everyone. 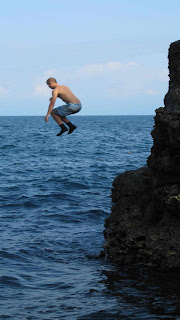 The final few days here in Papua New Guinea are being spent on the north coast with Dr. Scott & Gail Dooley and their three daughters, Allison, Emma and Olivia. When they had visited us in Arizona we took them to the Grand Canyon, and they wanted to reciprocate by taking us to Madang. We are spending a few days snorkeling, swimming in the ocean and swimming pools, and relaxing. I’m glad that we have some time to re-group prior to the flights back to Australia and to the U.S. This photo is of our oldest son, Michael, jumping off of a cliff into the ocean. It was about a 30 foot jump off of a lava cliff. I’ll admit that I was a chicken and opted to take the photos rather than to jump myself.
Thank you all so much for following my blog. My prayer is that the people here in Papua New Guinea have been blessed with our presence as much as we have been blessed with the opportunity to come here to serve them.  I hope to have one more blog entry this week, but access to the internet has been difficult. Blessings to all!
Posted by Allan T. Sawyer, MD at 8:47 AM