Thoughts for this week... 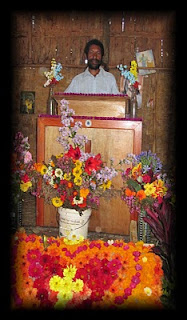 Sunday, June 20, 2010: Early in the week Dr. Scott Dooley asked me if I wanted to preach at a bush church today. My initial gut reaction was to decline, but I told him I would think about it. After a day or two of contemplating the commitment, I decided to take him up on it. Several months ago our associate pastor at church, Dan Gavaza, had referenced 1 Peter 2:21: “To this you were called, because Christ suffered for you, leaving you an example, that you should follow in His steps.” Later he told me that this was the verse that Pastor Henry Maxwell had preached his famous sermon in the 1800’s on in his church in Richmond, Illinois. The impact of that sermon led to the eventual publication of the book, In His Steps, by Charles Sheldon. Maxwell’s sermon and Sheldon’s book created the “What Would Jesus Do?” movement that has lasted for over 100 years. I had been reading this book for the past few weeks and it seemed appropriate to me to talk about what it means to walk in Jesus’ steps.
So this morning a group of about 20 of us headed off up the road about a half hour walk to the tiny thatched grass church called Misa Church. I had written my entire message on my computer in English, and then Dr. Dooley helped me to translate the entire message into Melanesian Pidgon so that I could read a few lines in English and then translate it myself into Pidgon. I was certainly outside of my comfort zone, but everything seemed to go well enough. Pastor Ruben hugged me over and over after the service, and I took off my necktie and put it on him; a gesture which made him hug me several times again. 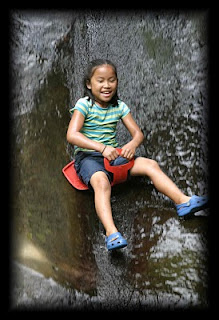 Saturday, June 19, 2010: After making rounds at the hospital this morning we headed off to meet the teenagers at a place referred to as slide rock. All of the teens here (and some slightly older and some slightly younger) were having a mini-retreat this weekend. It was quite the climb up the river gorge to the two areas where you could slide, willingly or unwillingly, on the rocks. Two little naked national boys were absolunte monkeys, running up and then sliding down the rocks. I captured some wonderful video of the entire event.  Here is Anna totally out of control on a vertical part of the river. 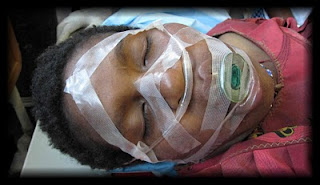 Friday, June 18, 2010: This morning Dr. Susan Myer’s, the pediatrician here, was making rounds with me when the midwife came in to tell us that a patient had come into the labor ward in labor and was seizing. The photo is of the woman after we had given her intramuscular magnesium sulfate, intravenous dilantin, and secured her airway with an oral airway and nasal prong oxygen. I almost hate to admit that the tape job is my own, but this was my only option to secure an airway. As soon as she was stable I delivered the baby with a vacuum device. The nurses were all pleased that I did not have to do a cesarean section. Fortunately the rest of the day was fairly unremarkable, ending with a nice quiet dinner with Dr. Scott and Gail Dooley. The Dooley girls, Emma, Allison and Olivia had invited our Anna and Amber to spend the night at their house for a sleep-over. It made for a very quiet evening at our house!
Posted by Allan T. Sawyer, MD at 8:17 PM