Going to the Operating Theatre 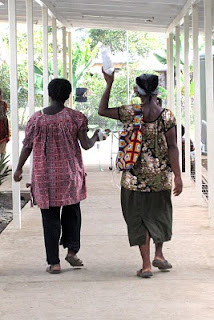 This is an all too familiar scene.  The woman on the left is going for a repeat cesarean section, and her friend on the right is acting as her IV pole.  A few minutes later she was in the operating room where Dr. Erin Meier and I performed her surgery.  I had first met Dr. Erin four years ago while at a World Medical Mission (WMM) conference at The Cove (The Billy Graham Training Center) in Asheville, North Carolina.  She was scheduled to go overseas with the post-residency program with WMM, however, she did not know which country she was going to go.  It was at that meeting that she met Dr. Jim Radcliffe (see earlier blog) and a few weeks later felt led to go to Papua New Guinea.  She has been here ever since and has accepted a full time assignment.

Dr. Erin had just returned from a brief visit to New Zealand, so this was the first chance I had to talk with her.  During the surgery we caught up on all that has happened in the last four years.   I also enjoyed the opportunity to share with her some of the techniques for cesarean delivery.

The surgeries here just seem to become more and more difficult.  The diseases and pathology are worse than anything I see in the states.

We did get some much needed rest over the weekend.  After a week we feel like we have finally made the 17 hour time change!  The morning bell is ringing...it is 7:30 AM on Tuesday morning.  Time to get dressed and head back to the hospital for a day of surgery.
Posted by Allan T. Sawyer, MD at 7:32 AM