Random Thoughts for the Week... 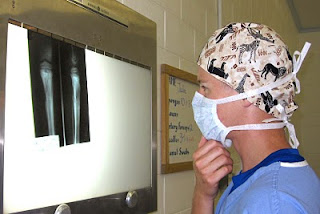 Thursday, June 17, 2010: One of the joys of going on medical mission trips is bringing my children. Here is our oldest son, Michael, in the operating room. Here he is studying the x-ray of a little boy with osteomyelitis (infection of the bone) while Dr. Jim Radcliffe was debriding the leg and treating the infection.


Andrew has yet to come into the operating room, but has been busy painting and doing maintenance projects. Anna and Amber continue to be popular with everyone. Here they are in the arms of Apa. Apa loves them, and I think it is because Apa's own child drowned in a river when he slipped off of a log and fell into the water with her child while walking home one night. They did not find the body of his young son for three days. 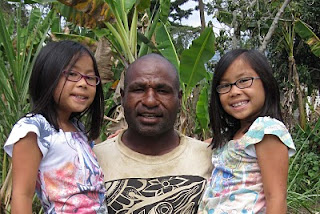 Teresa is starting on a new project, creating a computer program for the hospital pharmacy to be able to order medications from the government in a more efficient manner. She has been very busy being the hostess to different families nearly every night. 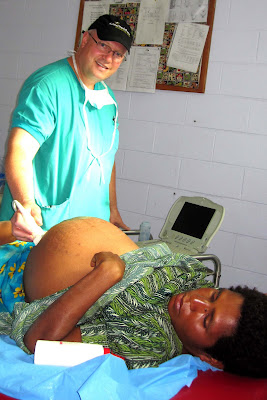 Here I am in the maternity ward doing an ultrasound. Papua New Guinea has one of the highest infant mortality rates in the world. It seems nearly every day when making rounds we hear of another baby that died in the nursery. The welcome manual for visiting physicians has the following to say about this, "The death of babies can be difficult to understand. It is common for a couple to have lost at least one child in infancy, and two or three is not too unusual. There is what I understand to be an attempt to hold the personhood of the child at bay until they have passed the most vulnerable first few weeks of life (for instance, by not naming a child until he or she is several weeks old). PNGers love their children intensely, so it is surprising to see how matter-of-factly they seem to accept the death of a newborn. The demonstrative grieving is not usually done in this situation, but if you watch the eyes of a new mom as you tell her that her baby is dead, you won't have any doubt that the grief is just as real."

Last night a little girl came into the ER with a skull fracture and injuries to her torso after a tree fell on her. She was in a coma. I just learned that she died earlier today.

Dorea, the little girl I wrote about with pigbel, is going home soon. I was able to give her a tootsie-roll lolli-pop yesterday. She had a big smile for me.

Hopefully our internet will stay up. Thank you for following my blog!
Posted by Allan T. Sawyer, MD at 5:26 PM