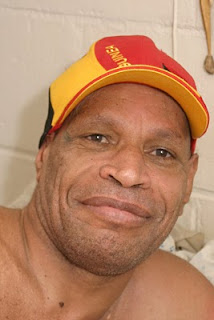 Peter Dom lives in the surgical ward.  Peter has lived at the hospital since Sunday, March 15, 1992.  On that Sunday he was attending an Assemblies of God church service when the old church building suddenly collapsed.  Everyone escaped the building without serious injury except for Peter.  An enormous beam had crushed his lower back, leaving him paralyzed from his waist down.  As Peter lay pinned beneath the beam he prayed that he would not die; but that God would spare his life.

Peter had two daughters at the time, named Dolores and Dolly, who were one and two years of age    when he was injured.

Ever since that day he has had to live at the hospital because he is limited to being in a wheelchair or in his waterbed that a missionary physician bought for him.  Only the hospital compound is paved, which limits the places he can go.  His "room" is a curtained off corner of the surgical ward.

Today as I interviewed him, he said that he is so grateful for his life and for his two grown daughters.  He told me that his favorite bible verse is Matthew 5:8 which reads, "Blessed at the pure in heart, for they shall see God."

If you or your children would like to make Peter very happy, then send him a postcard telling him that you know me and tell him about you.  He loves to receive mail.  You can write him at: Peter Dom, c/o Kudjip Nazarene Hospital, P.O. Box 456, Mount Hagen, W.H.P., Papua New Guinea.
Posted by Allan T. Sawyer, MD at 6:47 PM