We have not had internet access for nearly a week now, so I have to catch up on my blogs. I suppose I need to remember that I am in a third world country and that any internet access is a blessing... 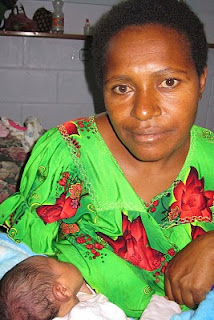 One of the hardest things for me to get used to in working in third world countries is facing death with such frequency. In the states when you see an empty bed where the your patient was laying the day before, it usually means that she is out walking or getting some test done. But here in the morning when the bed is empty it often means that the patient died the night before.


This morning when I was making rounds I noticed that the baby I had delivered was not with the mother. (This photo is of another patient and her baby.) I was not that surprised, because the baby had required resuscitation at the time of delivery and had been in the nursery. Sylvia, the ward nurse, then said something that put a pit in my stomach. “Her baby died last night.” The mother’s eyes stared blankly at me. There was no expression on her face. She just looked completely empty. The barriers of culture and language seemed enormous. I asked the nurses to be certain that the chaplain see her today and then I knelt down beside her and prayed for her. It seemed as if the barriers of language and culture melted away as her expression changed and she reached out to thank me for the prayer.
Later in the day in the clinic there was a Chinese lady waiting to be seen. I looked at her chart and noticed that she had a gynecologic problem. There are a few Asian people around here, but not very many that I have seen. As I listened I noticed that she was speaking Mandarin and also a little Melanesian Pidgon. I addressed her in Mandarin and then in Melanesian Pidgon and her face became radiant. Even though my Mandarin vocabulary is smaller than the number of fingers on my hands, this woman was so pleased with my efforts. I concluded the visit by praying for her in English and then saying good-bye in both Chinese and Melanesian Pidgon. As she walked toward the pharmacy to get the medicines I had prescribed her face was beaming with a smile from ear to ear. 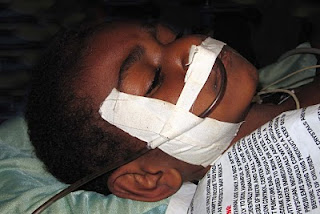 Wednesday, June 9, 2010: If any of you are lacking something to pray about, then please pray for Dorea. This sweet little girl had worsening diffuse abdominal pain and a high spiking fever up to 104 degrees. Her malaria smear returned negative. The diagnosis was pigbel. This photo is of her on the operating room table with a fever of 103 just before we put her to sleep to remove two feet of her small intestine.

Pigbel is a disease that is mostly limited to this island and is a problem related to ingestion of large quantities of undercooked pork. Typically the diet here is low in protein until someone has a “mumu” (which I think of as a luau) where a pig is roasted to celebrate a special occasion. Since there is no refrigeration all of the pig is eaten…and when I say “all of the pig” I mean every single part of the pig. Everyone eats and gorges themselves until everything is eaten. Little children, however, lack the protective enzymes to digest the meat and to kill the bacteria (clostrdia) in the undercooked meat, and then they develop areas of necrotic small bowel. When we opened up Dorea's abdomen we found areas of diseased and dying intestine and removed two feet of her small intestine.

She is such a sweet little girl, but is so horribly sick. To make matters worse, I learned that her mother had left her father and went off with another man and left Dorea in the care of her aunt. Please join me in praying for her; that the surgery and the antibiotics would treat the disease and that her life would be spared.

The irony of all of this is that pigbel is a disease for which there was an immunization available in the past. The immunization cultures had been completed in the past, at great expense, and a very effective vaccine had been developed. This vaccine was used for years in Papua New Guinea and it was believed that the disease was eradicated because the immunization was so effective. Then, as I understand it, the bill was left unpaid for the vaccine for one year. When the government went to order it the following year, the company that manufactures the vaccine insisted that the prior year bill be paid. This created an impasse. Now, several years later with no pigbel vaccine being made, even the initial cultures have gone bad, and not only is the immunization not being made anymore, but now it would be enormously expensive to develop the vaccine again.

It makes me cringe when I speak to people in the United States who are worried about immunizing their children against immunizable diseases. If only they could see the effects of these diseases that are so horrific that someone went through the expense of developing a vaccine. We are so fortunate in the U.S. to have access to affordable immunizations and it is such an irony that we worry about the side effects of the vaccines rather than being grateful for the protection from the diseases which they prevent.

Late in the afternoon three missionary families took all of our children up to the hospital with my travel bag filled with Tootsie-Roll Lollipops, beanie babies, and brightly colored rubber balls. In the morning I had made rounds with Dr. Jim on all of these patients. Some are young, some are old, come children, some adults. One woman had a hurricane lamp blow up next to her and over 50% of her body is burned. There are adults and children with broken bones (arms, legs and spines), infections of all kinds, abscesses, osteomyelitis with exposed bone, machete wounds, and amputations of all kinds. Thirty-one patients in all. 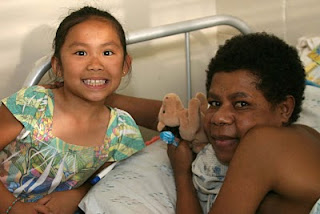 This photo is of our daughter Anna and a sweet young woman who is paralyzed from her waist down. She had been left in the care of some other people for a few days while her family traveled somewhere. The temporary caregivers did not care for her appropriately, and she developed huge decubitus ulcers (bed sores). Two days ago, after months of debridement, we closed the decubitus ulcers. She spends her days lying on her abdomen in her bed. Dr. Jim told me that if ever I am feeling sorry for myself to just go visit her in the isolation room.

As we went around the room from bed to bed we brightened the day of everyone there. Our children handed everyone in the room a tootsie-roll lollipop. To the children (and even to some of the adults) they gave beanie babies and colorful toy balls. They even sought out the people in the isolation rooms, the nurses, the security guards and the visitors and made certain that everyone received something. As we left the surgery ward everyone who could smile had a smile on their face with the stick of a lollipop sticking out of their mouth. It was a very sweet memory and one that I will not soon forget. It was a wonderful opportunity to have our children involved in ministry and to touch the lives of hurting people.
Posted by Allan T. Sawyer, MD at 12:35 PM